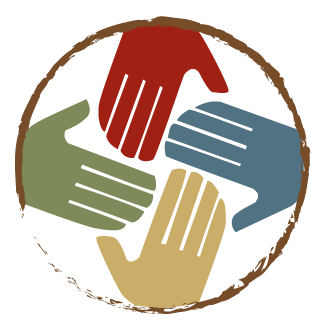 Collaboration
Collaboration is an excellent way to create music for multiple reasons; the creative ideas of two people can blend together in order to produce amazing results, deficient areas for one person can be supplemented by the strengths of the other, and a creative flow can happen where one person drives the other to create a better product than they would have done by themselves. These are some of the benefits of collaboration, but there are also some potential problems; one collaborator may feel that their contribution is more important than the other person’s, the dividing of responsibilities and work may not be equal to the dividing of the pay and royalties, and of course there may be personality conflicts and artistic differences.

I realized a few things after I had finished a collaboration project that had both good and bad elements as mentioned above. First, no song has ever been successful without some manner of collaboration, because there are a lot more aspects involved than in the process than many people think. Second, understanding those aspects and roles put each part into greater perspective as to pay and royalties. Third, successful songs usually have the majority of those aspects happening on a high level of quality in order for the song to be a hit.

5 Aspects
So I started to work up a list of the aspects of a successful song and I eventually narrowed it down to 5. 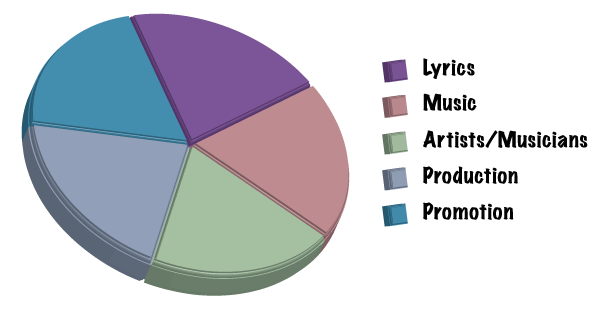 These are of course the words to the song, sometimes written before the music and sometimes after. The lyrics play a major role in conveying the meaning, the emotion, or the feeling of the song. The lyrics, rhyme scheme, and subject matter also need to be consistent with the style of music of the song, and most importantly need to be about something that the audience can relate to.

The music consists of melodies, harmonic structure (chord progressions), and rhythms. These are all important in also conveying the meaning, emotion, and especially feeling of a song. The music must match or compliment the lyrics in order to be consistent and effective. It would be really weird to hear very somber and melancholic music with upbeat and happy lyrics. The music must also be consistent to the genre of the song with similar movements in the melodies to other songs in the style as well as familiar-sounding chord progressions and rhythmic patterns.

The aspect of the artist includes both vocalists and instrumentalists. A good vocalists is a very important part of making a song a success…but a great drummer, an amazing lead guitarist, or a spot on keyboard player could also be key. Once again, the stylings of the vocalists and instrumentalists must be consistent to the genre or style of music that is being created. A surf rock lead guitarists would not really work well (no matter how amazing they might play) on an Adult Contemporary or R&B song.

Promotion is the entire business aspect, so it includes a lot more than just advertising. Branding, merchandising, managing, distribution, advertising, promotion, etc. These are all the things usually done by a record label and/or publisher. Once again, the approach will be specific to the genre and artist, band, or group involved. 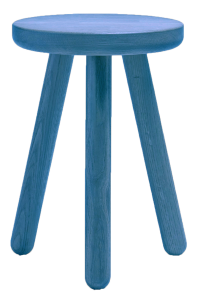 Looking at all of the elements of a successful song makes it more and more apparent that it is very difficult to do all of this by yourself, just like a stool needs at least three legs to stand on it’s own. It would be ridiculous to think that one person could be the best, lyricist, music composer, artist, producer, and promotion specialist around (if you disagree read this). More than that, who has the time to do all of those things…and do them well. This is why at some point, even if it isn’t in the actual songwriting (lyric and music creation), collaboration becomes a necessity in order to take a song to the highest level.

Remember that as you work and collaborate with others, that you don’t undervalue what they are contributing to the project. Don’t think that you or they hold the “Golden Ticket” to making the project a success. Always stay humble and realize that you need to work together to have success.

Each Aspect Is Important

Dividing these aspects into 5 was not by accident, it is very calculated to not only divide up the responsibilities but also divide up the importance. By realizing that each of these 5 are of near equal importance, it is easier to see why money gets split up in a similar way. The lyrics and music of a song only get 50% of the royalties. The other 50% goes to the publisher (often times the record label is the publisher) who does all the work to produce, promote and make money from a song. If an artist is just an artist and not a writer they will get a smaller percentage for doing their part, because as stated above there are lots of other parts that go into making a song a success.

All 5 aspects are important, but there are always examples that break the rules (of course it’s music), so it is possible to have a successful song without having all 5 aspects kicking on a high level. The caveat to that is that you can’t fail at more than 2 aspects and still have a success. You have to be hitting 3 of the 5 on a pretty high level to make it happen. Remember any songs that seemed to have horrible lyrics and music, but the artist was huge and the production and promotion were top notch, so it was a success. Or was the song great, but the artist didn’t have the greatest voice. As long as at least 3 are working well, you can be lacking in 1 or 2 areas and still have a hit. The one area that can’t be lacking is Promotion. It will never be a success unless it gets out there and people hear it. 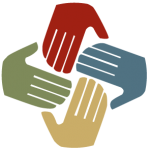 Collaboration is vital to creating and having a hit song, so embrace it. Respect your fellow participants and their roles in making the project happen. Always make it your goal to have all five aspects (Lyrics, Music, Artist/Musicianship, Production, and Promotion) firing on a high level and you will find success.

What Really Is A Mixtape?

Chord Progression Example – ‘Let It Be’ by The Beatles

theDAWstudio - May 7, 2016
0
Flanger is an effect original done with two tape machines. Both machines played the same signal and were synchronized to each other. The engineer...