The Rumors
Logic Pro X has been rumored for some time, especially considering the release of Final Cut Pro X in 2011 and the fact that Logic Pro 9 has been out since 2009. It’s definitely time for a new version, but most people have sworn off the “it’s coming out soon” rumors and have almost given up hope.

There is Hope!
Apogee recently released a new interface called Quartet. They produced a great video demonstrating the quick production of a song with the interface. Apogee has very close ties with Apple so if any manufacturer had a pre-release version, they would. Apogee made the mistake of using their version of Logic 10 in their new Quartet Interface video. Below is a still of the shot that occurs twice in the video showing the main window in Logic Pro X.

Notice all of the same Logic Pro features; blue audio clips and green MIDI clips, left column view of the selected track and the master fader, and the media bin inset on the right side of the screen. The main visual difference seems to be a black background for the arrange and mix areas, but confirmed rumors tell me that there are under 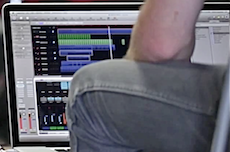 the hood changes to bring Logic Pro back into full competition with Pro Tools, Cubase and Sonar. I’ve even heard that Apple has pursued testers from the other software DAWs to test and consult with Apple to make Logic Pro X better than the rest.

Confirmation
What Logic X will include is still just a lot of rumor, but this leak provides visual confirmation that Logic Pro 10 is in the works. I also received confirmation from a supposed tester that this is a screen shot of Logic Pro X through his refusing to say whether this was Logic 10 or a tweaked version 9. He upheld his “Non-Disclosure-Agreement” by not saying anything. This is enough confirmation for me to know that Logic 10 will be released…eventually.

Below is the video that is the source of the LEAK