Sound Waves are vibrations that travel through the air. 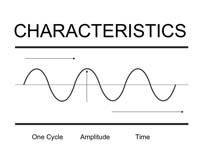 While they travel in the electronic and digital worlds they are commonly shown on a two-dimensional graph where the y-axis defines the amplitude (or loudness) of a signal and the x-axis defines the frequency (or pitch). The sinewave that is seen here is the most basic waveform in audio. It is a single pitch with no harmonics (or overtones). Harmonics are additional pitches that are sounded within a signal. They are mainly higher pitches and based on fractions or

ratios of the original signal. For example a guitar string vibrates as a whole. It also vibrates in halves (one half going one way while the other half goes the opposite). In addition, it vibrates in thirds, fourths, fifths, and so on. Every time the length of the vibrating material or wave is affected the pitch changes. So, when a string vibrates in halves, it produces a pitch half the wavelength and twice the frequency (or one octave higher) of the original. The series of pitches 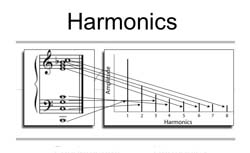 produced as harmonics may seem familiar to you. They are the basis of western music, producing octaves, fifths, and thirds, etc. The image labeled ‘Harmonics’ shows how different numbered harmonics fall into series with different notes of the scale. If you want to hear these for yourself, there is a simply test that you can do to help your ear notice the different harmonics.

Sit down at an acoustic piano and play a low “C” note. Hold it out and listen for higher pitches in the sound. Stop the note and play one of the harmonics (as listed in the staff such as “G”, “E”, or a higher “C”) immediately afterward. Listen for that harmonic as you play the low “C” note again. Repeat this process for the different harmonics. If you want to make the harmonics sound more apparent, hold down the sustain pedal while playing the fundamental. The harmonics of that note will cause the related note’s strings on the piano to resonate. This is called sympathetic vibration (when a specific item resonates at a specific frequency, other items tuned to the same frequency will begin to resonate as well). Now you should be able to hear many of the harmonics of that low “C” note. See how high in the harmonics series you can hear. You will notice that it gets more difficult as the pitches go higher. Listen to the richness of the sound that is created by having all of those notes sounding as harmonics with the one fundamental note. Finally, try different fundamental pitches and train your ear to listen for harmonics in other instruments as well.

Check out Types of Sound Waves to learn about the sounds that are used and manipulated in synthesizers.